After spending five days on safari in Ingwelala Private Game Reserve with Emile Sprenger de Rover, Liza and Greg Parker it was time for Part Two of the adventure.

Greg and I said our goodbyes to Emile and Liza and we headed out on a two-hour drive to the Kruger National Park in South Africa. I have heard of Kruger like just about everyone and I could not believe I was finally going to go on a photo safari there.

Greg being a native of South Africa has been there numerous times and arranged our accommodations for the next five days. His favorite place in the park is Orpen Camp, which we will stay at for the first three nights.

Orpen is a small camp and consists of a handful of small cabins, a small store and guest check-in facilities. About one hundred yards away just beyond the fence that surrounds the camp is a waterhole that many times is frequented by game.

After unloading and setting up our cabin Greg and I jumped back in his car for an afternoon drive making note of the time the gate closes for the evening. Greg is very knowledgeable of the area having spent so much time there photographing its wildlife and had a few ideas where to go immediately for that time of day.

A few minutes from camp down the main paved road Greg turned onto one of the many dirt roads that winds through the reserve. We were headed to a waterhole and bush area that he knew would more then likely have wildlife.

As we grew near there was a small heard of elephants ranging from large adults to small baby elephants.

I was amazed on how comical the baby elephants appeared. They would stumble, sometimes running into the larger elephants as they walked trying to keep up tripping over their own feet.

It really was a laugh watching them and we found ourselves lowering our cameras just to watch the show. Other times they seemed to be resting in the shade of the other elephants to get out of the hot mid-day sun. 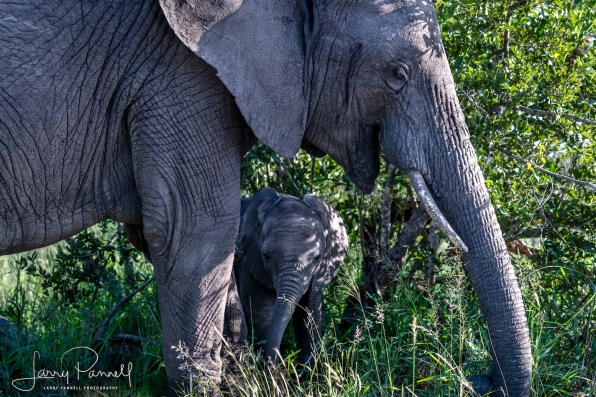 Greg and I watched the herd slowly moving through the groves of trees and bamboo eating their fill. Many times we were only ten to fifteen feet away from these magnificent creatures as our cameras clicked away in unison. To be fair Greg would generously position the vehicle or lean back so that I might get the better angle for the best shot.

There was more then one time a mother elephant seemed a little upset that we were so close intruding in what she deemed to be “her space” and would stating advancing towards the car. Greg would laugh at me when I would calmly say “don’t worry mama we are just taking pictures, we are not going to hurt your baby with the camera clicking away”. After which he remarked that he did not know of another “first timer” that was so calm during a false charge from these huge animals.

I attribute this to my days with my grandfather that was part Native American. He showed me how to read the wildlife and how to read the warning signs they will portray. You must remember at all times these are wild animals, they will attack and kill you if threatened, especially here in Africa. You are in their backyard they are not in yours.

Day two started at dawn when the gates opened. It was a gray day, with dark clouds and spilling rain over the grasslands and bush. It had been a very dry season causing a drought so the rain was much appreciated. It made photography more challenging with the changes in the light and contrast often being very flat or having to use much slower shutter speeds then we would have preferred when shooting wildlife. After all they are living creatures and on the move much of the time.

Our quest this day was to photograph lions that thus far had eluded us and we were not to be disappointed. After driving for about an hour came across a pride of two males, three females and three cubs. They were in the grass and under a couple of low trees. We watched and photographed the pride under the dark and rainy skies for about two hours. The lion cubs mock attacked each other learning skills that will help them later in life. 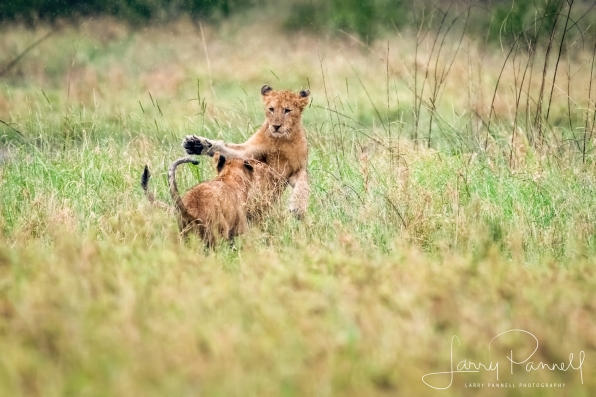 The females roamed the area looking for game or huddled with one of the males.

We then left this pride and decided to look in a couple other areas where we heard of  other lion sightings. Following another dirt road we came across a small pride of three males lions sleeping. Every now and then one would stretch and roll over revealing it huge belly that was stuffed with a previous kill. 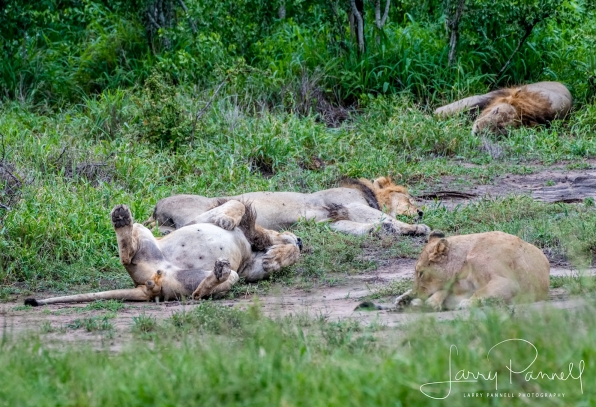 There was also one lone female with this group that was injured. She would get up and walk limping unable to put any weight on her right front leg. Greg remarked that if this did not heal there was a very good chance that she would be left behind by the males and eventually die.

We did spot one more small pride of lions as we continued down the dirt road, stopped to take a couple photographs and continued our drive.

As it was getting late Greg decided that we should travel to the waterhole to see if any wildlife had returned to cool off from the days heat. A large male lion was drinking at the waterhole. Greg assured me this was a great chance to get an unusual shot, as it is not something witnessed very often. 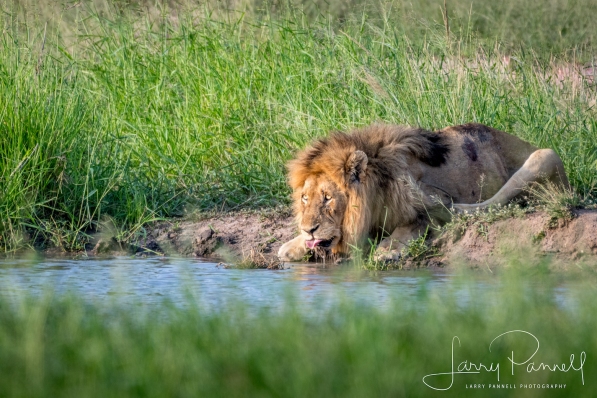 The following events that transpired left us awestruck in disbelief. First it was what we were witnessing and second as serious photographers what we were able to capture and record.

To read the entire story of the day and the heartbreaking events that occurred please look at the blog post from April 21, 2018.  “Death of a King”. 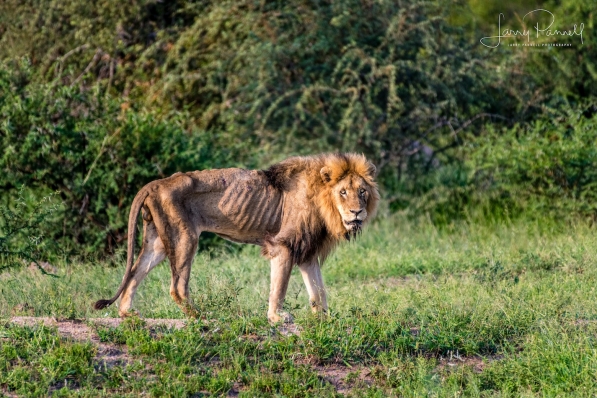 The next day we decided to return to the area that we had previously photographed the first pride of lions. The day had a bright blue sky with a few scattered clouds the lighting was much better and would make it much easier to get a quality photograph.

We arrived but the pride of lions was gone. We continued down the road in hopes of locating them. Instead we were rewarded by finding a couple cheetahs that were close enough to the road to reach with our lenses. We were able to get a handful of shots before they became bored with us and disappeared into the bush. 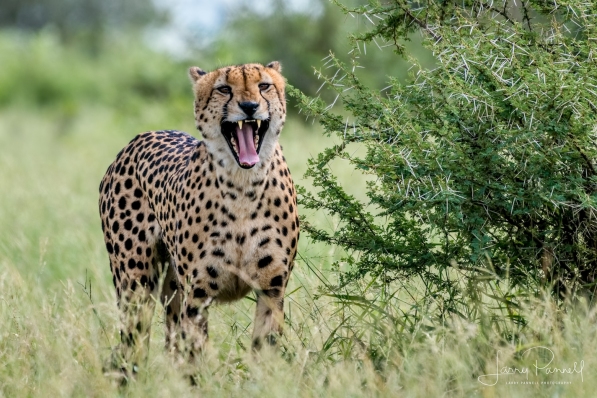 We decided to make a day trip and long drive to an area that we had heard that rhinoceros had been spotted. It was a long drive to the southern edge of the park. We decided to make an adventure of it traveling the back roads in hopes of photographing other game along the way. Unfortunately it was fairly bleak and not much was seen or photographed.

Arriving near where the rhinos had been spotted we drove slowly both of us scanning the bush for any sign. Then Greg called out “rhino!” Just a few yards away there were two rhinoceros rambling through the bush only stopping to grasp young leaves off a tree or to eat grass here and there.

Greg kept driving as I kept trying to keep track of the two rhinos that were darting in and out of the bush. We would stop when we could with Greg positioning the car so that I might get a shot. Luckily we both were able to get a few photographs before they turned and ran deep into the bush out of view.

Day Four and Day Five were on our way to another camp, Skukuza for two nights. Skukuza was a much larger camp then Orpen but not so large to be uninviting. Greg and his family have spent many days there on safari and another favorite he enjoyed. There are many different accommodations from small cabins to large homes, a restaurant, large gift shop and sits right on the banks of a large river.

Our hopes this day was to photograph a leopard, the only one of the Big Five that had eluded us. Greg said he knew of an area that once had a leopard that was near to camp. The drove down the main road as we scanned the grasslands and the bush. Circling back when Greg suddenly stopped the car. My heart raced in hopes that we found the elusive cat.

Instead what Greg spotted was a Verreaux’s Eagle Owl. As an avid birder Greg was very excited and said in the bird world this was just as an important sighting as a leopard. It was very regal as it sat perched on the limb of a tree watching as Greg and I raised the cameras and clicked away. 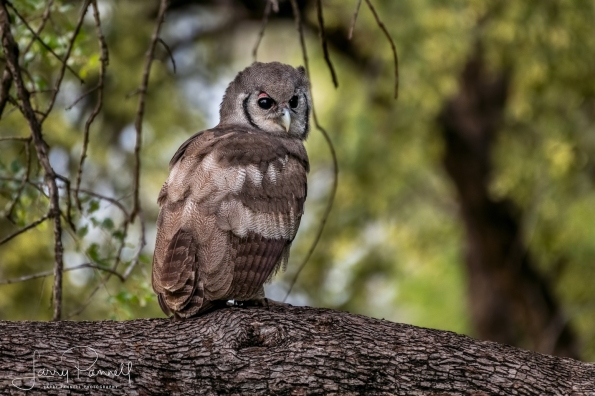 At one stop at a blind overlooking a large body of water we were able to photograph a number of hippopotamuses including a baby hippopotamus.

At the same location there was a very large Nile crocodile sunning itself in the mid-day sun. 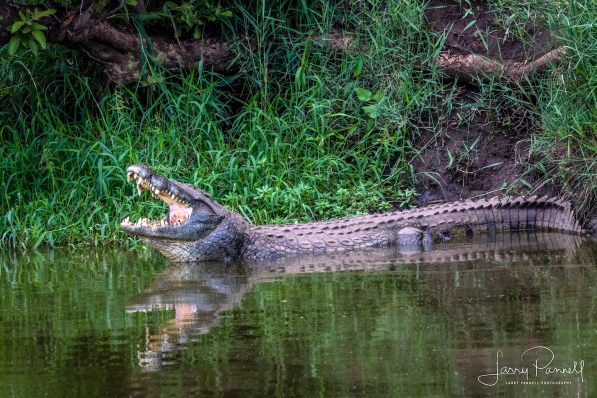 While overhead in a large tree a fish eagle scanned the water.

At one point a large monitor lizard crept out of the bush flicking its tongue until located a beetle here and there.

Close to sunset a waterbok slowly quenched its thirst unaware that only feet away lay a Nile crocodile. 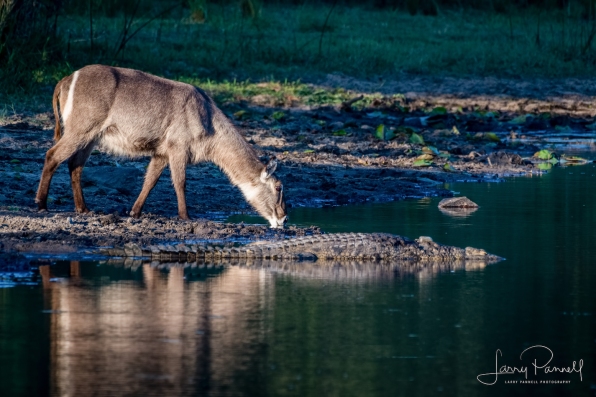 While in South Africa on safari we photographed a number of elephants, cape buffalo, baboons and wild dogs. We also saw a number of the antelope family including impala, waterbok, bushbuck, duiker, klipspringer, kudu, sharp’s grysbok and steenbok. We were also able to capture wildebeests, zebra and giraffe. Unfortunately yet again the leopard had eluded us but it was not for lack of trying.

Please visit an upcoming post for additional photographs of the wildlife that I was able to witness and the images I was able capture while on safari in South Africa for you to enjoy.

I started my career in photography as a professional photojournalist in 1978 at the time working with several newspapers and magazines in Southern California. What I loved most about photojournalism was its diversity and over my career I covered professional sports, concerts and travel. As life would have it mine took yet another turn and in 1988 I developed an interest in holistic medicine. I became a professional massage therapist specializing in sports medicine. In 1991 I decided to go to medical school and obtained a medical degree in Traditional Oriental Medicine and stared my career as a licensed acupuncture physician. After medical school I moved my practice to northern Idaho for a year before settling in the resort area of Sun Valley, Idaho. I’ve always been an outdoor person and hiking and backpacking the Rockies and fishing the pristine river waters and high altitude lakes offered me a wonderful photographic opportunity. In 2010 I left Sun Valley and I once again found myself on a cruise ship, this time working as an “Acupuncturist at Sea”. For the past seven years I have traveled to over 79 countries, which has allowed me to photograph much of the world. View all posts by larry pannell